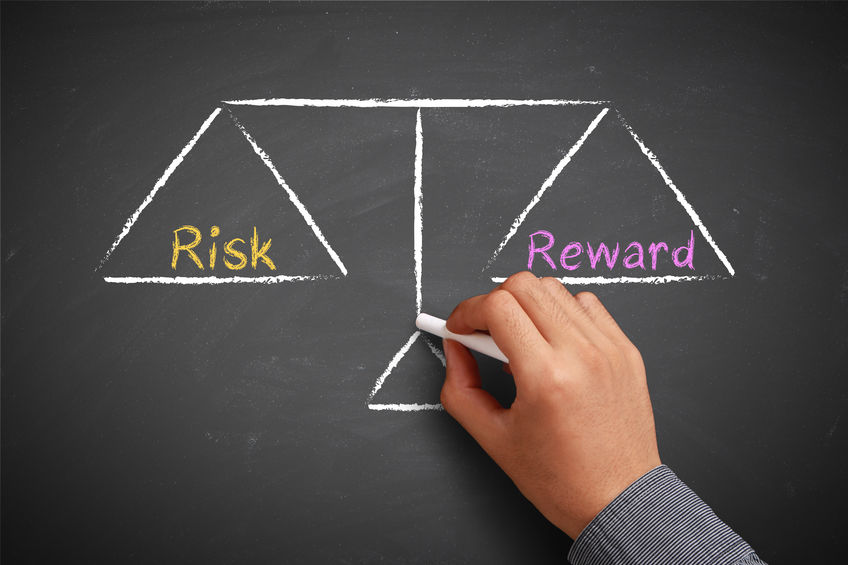 You want to win every trade.

But you know, you don’t need to win every trade to be successful.

In fact, you can lose 90% of the trades you place and still make a horrendous amount money.

By understanding Risk to reward ratio.

In simple terms, risk to reward ratio is a ratio that compares the expected return from a trade (reward) with the amount of money at risk (risk).

The ratio is expressed as two numbers separated by a colon, e.g 1:2.

The first number in the ratio is the risk and the second number is the expected reward.

So a trader who places a trade with a 1:2 risk to reward ratio is risking 1% of the money in their account to make a 2% gain.

How To Determine Risk To Reward Ratio

Given it’s name you’d think risk to reward ratio is this difficult, hard to understand thing that require loads of math skills.

To determine the ratio you only need to know two things:

So lets say you wanted to figure out what the risk to reward ratio was of a trade.

The first step is to determine how much of your account is at risk.

This is really easy.

Just work out how much you’ll lose if the trade doesn’t work out i.e the price hits your stop loss and then figure out what percentage of that constitutes to your account.

Whatever percentage that is is the “Risk” part of the ratio.

So for example, let imagine you had 1000 in your account and you were planning to place a trade that could lose you 10.

Now that you have found out the Risk, the next step is to figure out the reward.

But lets just say for the sake of the example the reward was 150 (again, assuming you had 1000 in your account)

So the risk to reward ratio of this trade would be 1:15.

Important Note: As a general rule of thumb, it’s best to never risk more than 1% to 2% of your account balance on every trade.

How Understanding Risk To Reward​ ​Ratio Can Help You Make Money

After the reading the above you might be thinking “is knowing the ratio really that important”.

And the answer is yes.

The reason why isn’t because of the ratio itself, but because of what it means if you understand it.

What you would rather have:

The strategy with the 90% win ratio, right?

So even though you would have lost 4x as many trades using the 20% win rate strategy, you actually would have twice as much money, because it’s risk to reward ratio was way higher, making more it profitable.

What this shows is something very important.

You don’t need to win on every trade to be a successful trader.

You can lose money on 70%, 80%, even 90% of your trades and still be massively successful, all thanks to risk to reward ratio.

Understanding the ratio can help in other ways too.

For example, knowing you don’t have to win every trade to be successful makes trading less stressful, which in turn, makes it easier to make money.

It also decreases your fear of losing money, because if you know you can lose 90% of your trades and still make big profits then why care about one tiny loss? You know you’re probably going to make money on another trade so losses don’t have the same effect.

Risk to reward ratio is one of those concepts that doesn’t seem important on the surface but in reality can be a game changer.

If you want a trading strategy that has a good risk to reward ratio on the trades check out my “Pin Bars and support and resistance levels article.