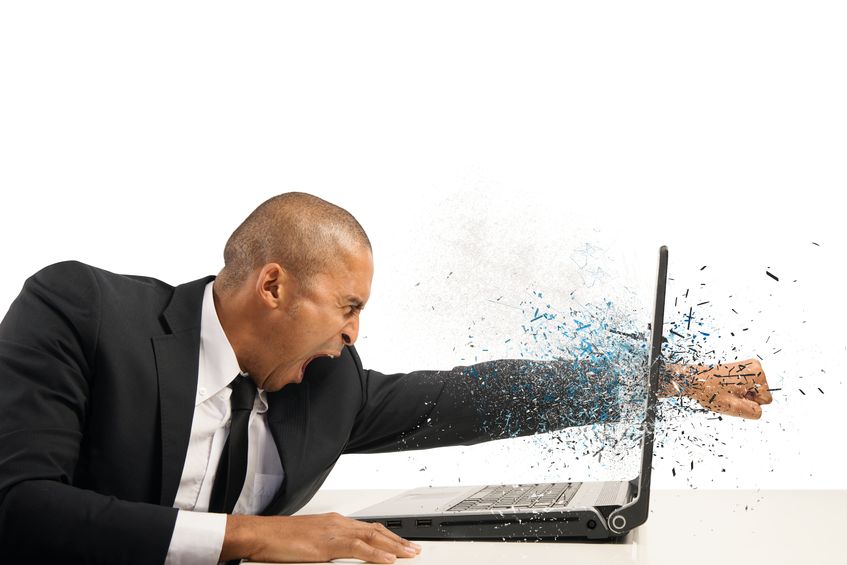 Handling losing trades well is what separates the winners from the losers.

Winning traders always keep their losses small and view losing trades as (A) a natural part of the business of trading, and (B) an opportunity to learn how to improve their trading.

Every forex trader has losing trades, even the most exceptionally talented, knowledgeable, and just downright lucky ones. There’s a very old trading adage that reveals a fundamental truth about trading – “Losing trades are part of being a winning trader”.

That said, here are some things you can do to deal with losing trades.

Accept That Losses Are Part Of The Game

The first step in successfully dealing with losing trades is simply accepting that you will sometimes have losing trades.

Repeat it to yourself – “Occasionally, I’m going to have a losing trade” – until you do accept it, until you can tell yourself that without it bothering you, until it elicits no more than a shrug of acknowledgement in reaction.

Every trade you make isn’t going to work out and show a profit.

Sometimes your analysis will be wrong, sometimes your timing will be off, and sometimes you might get into a trade and be going great, and then out of left field there’s an unexpected news event that suddenly propels the market in the opposite direction and blows you out of the trade.

At any rate, and for whatever reasons, you’re going to have a losing trade now and then.

In order to be a successful trader, you have to first of all just accept that as an inescapable fact about the game of trading.

If you fail to accept losing trades as a fact of trading life, then you will only perform worse as a trader, basically because you won’t be trading in harmony with the reality of forex trading.

Additionally, being in denial about having to live with occasional losing trades leads to bad – make that terrible – trading habits, such as cutting profitable trades off too soon or failing to enter the market and take advantage of great trading opportunities due to a fear of losing.

Another notoriously bad habit common to traders who refuse to accept losses is “revenge trading”: trying to immediately recoup your losses after a losing trade, which usually results in just making a series of – totally unnecessary and ill-advised – additional losing trades.

A good attitude to have about losing trades is to see them as necessary steps toward your goal of being profitable overall.

Just like a good salesman deals with rejection by seeing every “no” as getting closer to the next “yes”, good traders look at a losing trade as just getting them closer to the next winning trade. If you’re in the middle of a losing streak, remind yourself that you have winning streaks as well.

Change Your View Of Losses

Successful traders look at losing trades as a learning opportunity, something that can help them become a better trader.

Before we go any further here, I want to make one thing clear:

Just because a trade ends up being a loser, that doesn’t necessarily mean that you did something wrong. Sometimes you do everything absolutely right, but a trade just doesn’t work out.

Winning traders know that whether a trade is “a good trade” or “a bad trade” is a separate issue from whether the trade ultimately won or lost. Of course, making a bad trade is much more likely to end up losing you money than making a good trade is. But it’s still a fact that sometimes even the best trades just don’t work out.

For example, the exchange rate for Aud/Usd has historically ranged between approximately 0.5000 and 1.1000.

So if you’re a long-term trader, and with Aud/Usd trading at 0.7000, you have a good technical trading strategy – one that has proven consistently profitable – that is signalling a price move upward, then buying Aud/Usd at that price level is a GOOD trade.

You stand to potentially gain twice what you reasonably risk losing.

However, it’s also a fact that the price of Aud/Usd may continue falling, and stop you out of your trade. But getting stopped out of that trade for a loss wouldn’t make it a bad trade. It would just be a good trade that simply didn’t work out.

All right, now having said that, it’s also a fact that a lot of times when we have a losing trade, it’s because we have done something wrong.

A much more common error is that of having executed or managed a trade badly.

For instance, you might have run your stop unreasonably close to your entry point, causing you to get stopped out before the market ultimately moved in the direction you were predicting it would.

When winning traders have a losing trade, they always analyze the trade afterwards to see what they might have done wrong to learn how to handle a similar trade better in the future. The trade may have cost them a little money, but they turn it into a profitable learning experience.

In contrast, losing traders generally refuse to face their losing trades, preferring to ignore them as much as possible, and trying to just quickly put the losing trade out of their mind.

By adopting that attitude, they fail to take advantage of the opportunity to learn from their mistakes.

Don’t Ever Give Up

Losing traders tend to be overly emotionally invested in their trades, and when a trade doesn’t work out, when they experience a loss, it tends to totally throw them off their game.

A lot of times they walk away from the markets – shut off their computer and refuse to even look at trading again for several days while they lick their wounds.

While it can be tough to keep going right after suffering a loss, especially if it’s a really bad loss, you shouldn’t let losses totally shut you down as a trader.

Well, for one thing, because losing trades are very often followed by great winning trades.

If you’re totally out of the market, you may miss an excellent opportunity to make money just because you happened to lose some right before that opportunity came along. And you’re just going to feel worse when you come back to trading a few days later and clearly see a wealth of great trading opportunities that you missed.

It may be a good idea, particularly when you suffer a big loss, to only re-enter the market trading smaller positions until you hit a few winners and get your confidence back.

I remember just the other day, I was looking at the markets, and I wasn’t seeing anything at all that looked the least bit promising. I was thinking it might be one of those days that just didn’t offer any good opportunities. But then I happened to look at a currency pair that I don’t trade very often – the cross rate, Aud/Nzd – and I saw an obvious buying opportunity.

I ended up pocketing 80 pips on that trade – but that only happened because I was actively looking for an opportunity.

You can deal with losing trades a lot more easily if they aren’t gigantic losses.

Practicing good risk management, never taking on a trading position that risks too much of your trading capital, is key to being able to successfully deal with losses.

If you lose five pips, it’s no big deal. It probably won’t even make a noticeable dent in your account balance. But if you lose five hundred pips?…Now, that’s hard to handle.

Small losses, even a string of them in a row, are easier to dust yourself off from and continue on, looking for your next winning trade. So just avoid taking unnecessary big hits that threaten your ability to trade at all.

One of the worst experiences a trader can have is – because of not practicing good risk management – losing so much of your trading capital that when that next great “home run” trading opportunity does come along, you don’t have enough money left to take full advantage of it.

Remind Yourself How Wonderful It Is To Be A Forex Trader

It’s easy to get discouraged sometimes if you take a hit or two in the markets, especially if maybe you made a dumb mistake that makes you want to kick yourself because you “know better”.

Call up one of your friends who hates the “regular job” he has to go to six days a week and work 50 or 60 hours at every week. The poor guy may even have to work on holidays sometimes.

Let him blow off some steam by telling you how aggravating it is being stuck in traffic driving to and from work every day; how his terrible boss is always standing right over him and berating him for every tiny mistake; how he has to drag himself into work every day, even if he’s sick as a dog; how there’s virtually no chance of getting a raise or ever making any decent money.

By the time you get off the phone, you’ll probably be feeling pretty great about your life as a trader, even if you’ve had a bit of a bad trading day.

Remind Yourself How Easy it is to Win

When you have a losing trade, think back to the last winning trade you had.

In fact, think about a lot of your winning trades – and just remind yourself that every time you put on a trade, you have a chance to make money.

Forex trading isn’t the easiest thing in the world to learn to do well, but it isn’t the most difficult either.

All it takes is time, study, and persistence. And anyone can manage all three of those things. Losing trades are just part of the game – a business expense.

Just because your trading business has expenses, that doesn’t mean you can’t make a million dollars from it, right? – Right. 🙂